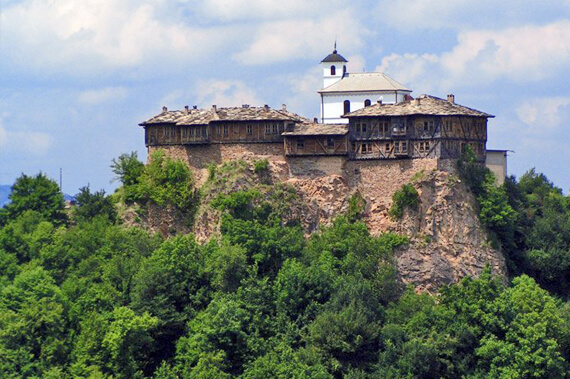 According to the legend, the monastery was built in the 13th century (1224), when Ukrainian knyaz Georgi Glozh settled in the area with Ivan Asen II's approval. The knyaz founded a monastery carrying the name of St George, whose icon he had brought with himself. The icon then disappeared numerous times only to be found on a hill not far from the village of Glozhene, which was interpreted by the monks as a divine sign to move the monastery there. This was eventually done near the end of the 14th century.
The Glozhene Monastery is an Eastern Orthodox monastery located on the northern slopes of Stara Planina in Bulgaria, near the village of Glozhene and the Cherni Vit river, 12 km from Teteven.
The two monasteries existed in parallel for a short time, being connected by a tunnel to each other, but the tunnel, used many times by Vasil Levski during his secret missions, was destroyed by an earthquake in 1928. 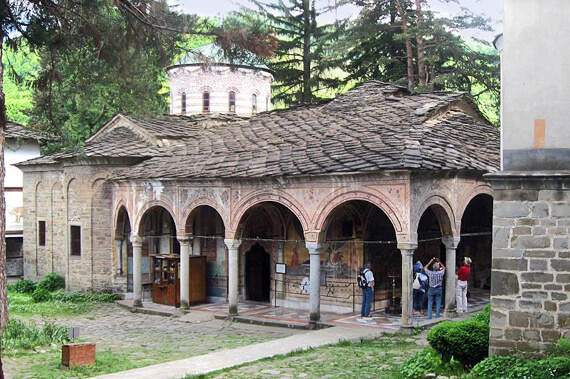 The Monastery of the Dormition of the Most Holy Mother of God or, as it is more commonly called, the Troyan Monastery is the third largest monastery in Bulgaria. It is located in the northern part of the country in the Balkan mountains and was founded no later than the end of the 16th century. The monastery is situated on the banks of the Cherni Osam near Oreshak, a village 10 km from Troyan in and is a popular tourist destination.
The main church of the monastery was reconstructed near the end of Ottoman rule during the Bulgarian National Revival period by a master-builder called Konstantin in 1835. The ornate interior and exterior of the church were painted between 1847 and 1849 by Zahari Zograph, a popular Bulgarian painter of the time, who also painted the central church of the , the largest monastery in Bulgaria. Many of the "moral and social experiments" of art at the time such as Doomsday and Wheel of Life were reproduced at Troyan. One highly controversial move by Zograph was to paint his image around one of the windows in the back of the church. The iconostasis in the central church is a wood carving dating to 1839. The Troyan Monastery is also, since the 17th century, the home of one of the holiest icons in Bulgarian Orthodoxy, the Three-Handed Virgin.
Many people make a pilgrimage to this monastery on St. George's Day because of an icon of St. George in the main church. 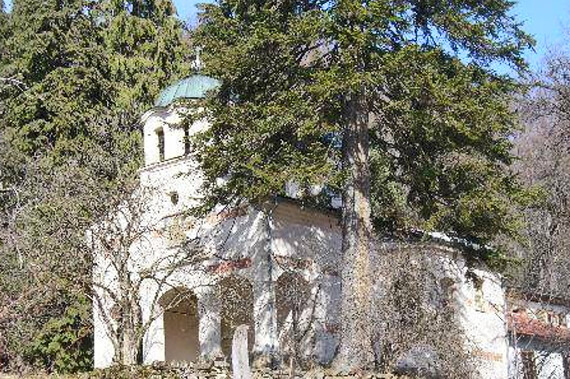 The Zelenikovski monastery is situated 5 km by car and another 2.30 hours hiking from village Cherni Osam. After Cherni Osam in the direction to the Balkan mountain another 4-5 km and you will reach a water pumping central. On the left side of the road there is a green building, behind which the hiking path for the Zelenikovski monastery starts. The path has lots of orientation markings which are in blue.The rout passes through oak and pine tree forests. From to time a wonderful view to the hills can be seen. If you are lucky one you can even see deer or some other wild animals.
The forest path passes through the Glushka area (small village) – the old huts where local people used to live in the past is of a great interest for tourists. Zelenikovski monastery is named after the region Zelenikovec. The monastery is built in 1834, but during the April rebellion it was burnt down, in 1913 is rebuilt. Here is the summer residence of the Bulgarian patriarch (the main priest according to the Orthodox).
In the past it was the place where the summer residence of tzar Boris III was built. Nearby is the best area for picnic – Vladishko kladenche.