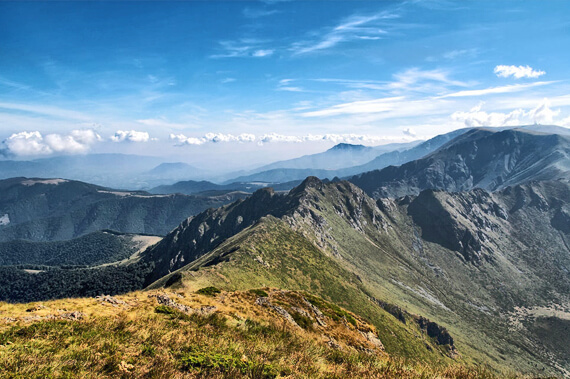 Troyan Balkan is situated between pick 'Ushie' in West and the springs of Tuzha river in East. In this part the mountain is incredibly beuatiful - sharp peacks take turns with round green grass hills. If we follow the mountain from East to West we will first see "Maragidik" peack. The city of Troyan is situated on 20 km form "Beklemeto" (1360 m) in the southest part of the Troyan manicipality. The most interesting of the mountains in the Troyan Balkan is Vasiliova mountain which is the most comon choice for tourists. Vasiliova mountain starts from "Beli Vit" river in East and goes to the the Troyan valleys to the West. The main ridge of the mountain is covered with oak forests and fern meadows over which you can see the peacks "Treskavec" , "Tarsa" , "Golesh" , "Kojnec", " Golqm and Malak Wasiliovski kupen".

The relief is really com plicated. There are parts of Stara planina mountain (planina in Bulgarian is mountain). Really close around the town Troyan are several hills – such as Turlata, Turneto, Bukovets, Kupincho and Kaleto. The highest tops are those of Troyan’s mountain (part of mountain Stara planina) – the top Golyam Kupen - 2169 m. And Ambaritza - 2166 м. If you have climbed one of those tops and hills you could see the lovely Danube valley and another mountain – Sredna Gora. 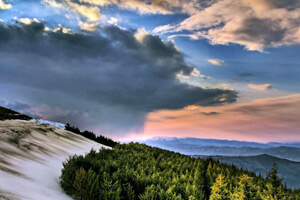 Troyan is famous not only for its fantastic wild nature, but also good and mild climate. The average temperature for the year is a little bit lower than the temperature for North Bulgaria. The summer is not so hot and the winter is milder. Here October is warmer than April and the amplitudes are smaller. The snow is from 30sm. to 60sm. In the mountain the snow starts snowing from November to the end of April, but sometimes there is still snow till July.

There are two basic rivers passing through Troyan - Cherni and Beli Osam. They start from the mountain. After gathering into one river the new river is named only Cherni OSam and finally goes into Danube. The river Cherni osam is considered for a main river because of her bigger length.

Soil coverage in Troyan region is comprised of gray forest soils. They are developed in the broken ground of the fore-balkan secondary structural forms with oak vegetation present. Valley teraces are covered by fertile alluvial soils. Raising in height below the moist beech forests, spots of brown forest soils appear, that comprise large areas above 1000 meters altitude. Mainly potatoes, oats and raspberries are planted there. Along the mountain plateau, where grass vegetation is present, mountain meadow soils are developed. Deluvial and alluvial soils, where orchards thrive, are also found there. This vertical change on soil coverage is closely related to terrain development in altitude and vertical climate zoning. In Troyan region, brown clay soil is also abundant, which is a prime prerequisite for pottery development.