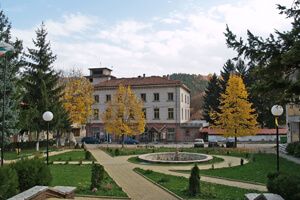 Cherni Osam village is located 13 km from the town of Troyan and 3 km from the Troyan Monastery. It is Located in a lovely valley with beautiful houses with paved road and streets with flowering gardens and fruit trees. The village there is the Natural History Museum, where you can see many representatives of the Bulgarian fauna - mammals, reptiles, insects. Valley of Cherni Osam River is a wonderful micro-tourist area with comfortable places for recreation, with many historical and natural sites to visit. The climate is temperate and favorable. Summer is not so hot and the winters are soft. The vegetation cover is mostly forest and grass. In the lower part dominated forests of hornbeam and oak, while the highest (over 800 m) - beech forests. In the upper part of the river there are trouts. In the forest are living: bears, deer, wild boar, wild cat and marten. 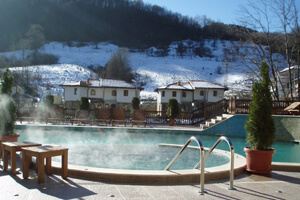 The village Chiflika is located on 750m and 3km from Troyan monastery. The village is located in the bottom of the "Old" mountain, in the valey of White Osum. The village is surrounded by thick forests and lush pastures. The winter is soft, summer is cool and the air is crystal clear. Near the village there is a powerful geothermal spring flow with 3000 l/min and a temperature of 52 °C, the water is suitable for diseases of the musculoskeletal system, respiratory, neurological, urological, gynecological and gastrointestinal diseases. There are built holiday houses, private rooms, hotels and swimming pool with Olympic dimensions.
The landscape is very beautiful with alpine character. There are natural relief and biosphere, attractions of the National Park "Central Balkan", "Koze stena". In the village is glowing the famous edelweiss. Only a few kilometers away is the chalet "Haidushka polqna". The surroundings of the lodge offer opportunities for hiking and it is a starting point for many mountain routes: The chalet "Echo" - 4:30 pm., Hut "Koye stena" - 2.30 pm., ÄGoat WallÄ (1670 m.) - 2.30 pm. and others. 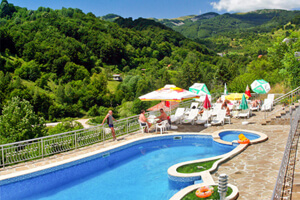 The mineral water is extremely useful for joint and nerve diseases. Mineral baths are located 3 km from the Troyan Monastery. The resort has a swimming pool and a spa center and offers treatments. The mineral has healing stitches indicators. It is used for treatment by baths and by drinking the following diseases: bathrooms mineral drilling "L36" help under the following conditions: neurological disorders, joint disorders, muscle and neuromuscular apparatus of the extremities, early stages of hypertension, primary phenomena of atherosclerosis, mild forms of cardiovascular disease;               water from mineral spring "L28" is indicated for the treatment mainly by drinking at: gastrointestinal diseases, hepatobiliary diseases; kidney and urological diseases and others. 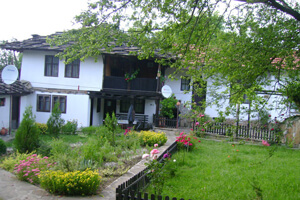 The village is located 1km from Troyan monastery (Troayn city). The village is located in the two side of the river Black Osum. Troyan monastery is teh third biggest monastery in village Oreshaka, which is one of the most precious monument in Bulgaria. The monastery is built in 1782 г. In the chirch "Uspenie Bogorodichno" is located the magic icon "Saint Bogoroviya Troeruchiya". Every year n 15 of August the village is celebrating and this icon present in a public area. This is one of the three miraculous icons in front of that many Bulgarians worshiped and prayed for the liberation of our nurses from Libyan authorities. The monastery museum has preserved the memory of the Apostle of Freedom - Vasil Levski. Open year round. Magernicata the monastery offers a warm and nutritious food and available guided tour.
The village is known for its "national fair-exhibition of traditional crafts."                Troyan is the only country where the exhibition halls are displayed unique items of folk arts and crafts made by Bulgarian artists of all ethnographic regions of our country. The exhibition complex was built in 1971 on an area of 50 acres and includes 8 exhibition halls with a total area of 4200 square meters

From the beginning of the exibition here are created the following events:

Many of the participating artists have made donations of their subjects who are exposed in one of the exhibition halls. Since the exhibition is created it is visited by over 2 million of visitors. 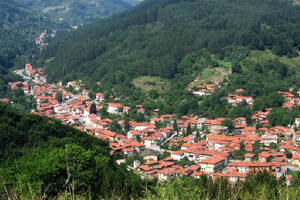 Shipkovo Village is located on the northern slopes of the Central Stara Planina, 3 km from the Troyan Monastery. The name of the village comes from the first settlers, a legend says that the village is surrounded by dog ​​roses. Shipkovski spa resort is located near the Shipkovo. The resort has a well-developed base of dining and entertainment. Moderate altitude of about 700 meters, cool summer and soft cold winter, diversity of the forest vegetation are favorable for the development of the resort. Rosehip belongs to the area of ​​the region and create a continental climatic zone of Bulgaria. The climate is ideal for people with respiratory problems. The average temperature in January is about: -2 ° C in July about + 20 ° C, and the average yearly about + 10 ° C. 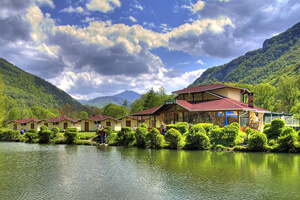 Ribaritsa is very charming village full of small villas, green areas and flowers. It is a very quiet place. Its a place where you can feel the real village atmosphere and home business. In Ribariza the traditions are still alive: old mills, which continue grinding, colorful rugs, plum brandy, delicious homemade jams from berries, famous mountain cheese, master craftsmen, who make beauty of wool arts. 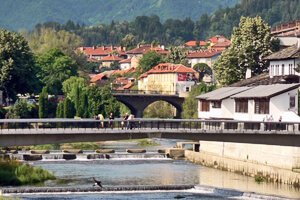 Troyan is located in the valley of Beli Osum River in the northern part of the Balkan mountains (450 m). The town of about 25,000 inhabitants, situated 180 km northeast from Sofia and 70 km south from Pleven. In the area there is a ancient Roman road "Via Traiana", connecting the Danube with the Aegean Sea, which gives the make of the towm. In the XIX century the town was famous crafts - carpentry, fur-cap making, blacksmithing and others. Even today the city is famous for the production of pottery. The town has very good geographical locations. In the center of Troyan is situated the Museum of traditional crafts and applied arts, where you can see many examples of old artisanal production. In the city can been see as well the church "St. Paraskeva", the Art Gallery, the City Tower, interesting architectural old houses of Minko Nikolov, Ivan Pickles, Baleevata house and some old buildings in neighborhoods Dryanska and Popishka. Very close to Troyan, only in 17 km from Troyan, along the Beli Osum has a hot mineral spring. The village is called Shipkovski spas, which offers very good conditions for spa tourism. Not far away from the city is located the resort "Chiflik", also know with his spa opportunities. Near the city only 20 km away is located Beklemeto resort with several hotels and ski slope for winter sports lovers. Five km southeast of the town is loacted the village Oreshaka, known for his contemporary masters of ceramics and souvenirs. Nearby is situated as well the famous Troyan Monastery, which is the third largest in Bulgaria. These resorts are a starting point for various hiking to the highest parts of the mountains, which are part of the Troyan municipality falls within the National Park "Central Balkan". In the area of the "Koze stena" hut are living many wild animals and various special kind of birds. 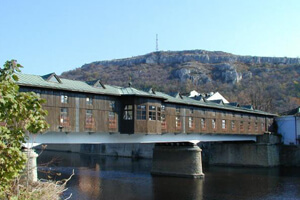 Lovech is one of the oldest towns in Bulgaria. Traces of human activities from very ancient times were found in the region, mainly in the caves near the town. The reason was the comfortable location between the mountains and the flat country, and the presence of a river.
The Covered Bridge in Lovec is one of the most interesting monument in the town. The bridge crosses the Osam River, connecting the old (Varоsha) and new town parts of Lovech, being possibly the most recognisable symbol of the town.
After the bridge that then served the town was almost completely destroyed by a flood in 1872, the local police chief ordered the famous Bulgarian master builder Kolyu Ficheto to construct a new one. Ficheto personally chose the material for the wooden bridge. Each citizen of Lovech contributed to the building process, the poorer ones working themselves and the wealthier donating money and paying other workers. Building finished in 1874. 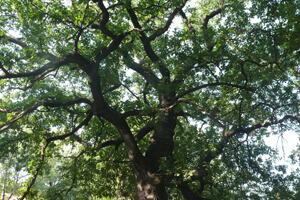 The Kartsov beech is located in the area of the Beklemeto, around 1km from the center of the resont. The area is part of the road Eskus - Filipopol. In this place was discovered the ceremic material from the Trakian, Thracian, Roman and early Byzantine era. From here the south-east road, which crossed a ridge of the mountain lead to the peak of Kurt Hisar. Historical this peak is famous by taking part the Russian - Turkish war of 1878. 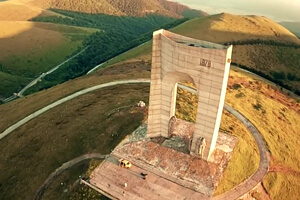 THE ARCH OF THE LIBERTY

Near the Troyan Pass is loacted the monument "Arch of freedom" on the Goraltepe peak (1595 m). The pick is located 15 minutes east from the highest point of the Beklemeto Pass. It is a massive structure of concrete with a height of 35 meters. Although this passage is not among the most important points in Russo-Turkish War, and even less in the events on the entry of the Soviet Army in Bulgaria in September 1944, the arch was dedicate to "Russian and Soviet liberators".